Filming Greece | Labyrinth:
Dimitris Athanitis and the Uncanny Elegance of the Arcades

His film “Invisible” won 15 awards and screened at 40 film festivals. His debut film “Addio Berlin” won the Jury’s Prize and Critics Mention at the Thessaloniki International Film Festival (TIFF) for its innovative style, while his second feature “No Sympathy for the Devil” (1997) was nominated for Best Feature Film and won the Best Actress Award at TIFF. “2000+1 Shots” was placed by Australian film critic B. Mousoulis among the 10 best films of the year for the Senses of Cinema film journal.“Three Days Happiness” won 4 awards and was screened at more than 20 festivals. Athanitis has also written two books, Secret Encounters (2017), a cinematic voyage through meetings with stars, directors, writers and underground figures and his second book Scripts (2020) contains the scripts of his first two films, Addio Berlin and No Sympathy for the Devil.

In his documentary “Labyrinth”, a poetic and elegant stroll in the labyrinth of arcades in Athens’ heart that interweaves the history of the city with the evocative stories of the store-owners, Athanitis composes an ode to the lure of Athens and its people. The movement of the camera as it submerges in the labyrinth of the arcades provides a mystical touch to the film, resembling a dive into the unconscious. Interviewed by Greek News Agenda* Athanitis talked about his love of the arcades and his resolve to hold on to their light as they fade out in the course of his documentary.

What drove you to this documentary?

I was born and raised in the heart of the city. I have a strong relationship with all these places in the film, with all these arcades. I have walked through them a thousand times. Now, watching them fade out, I wanted to maintain their light, their image as they are still alive. 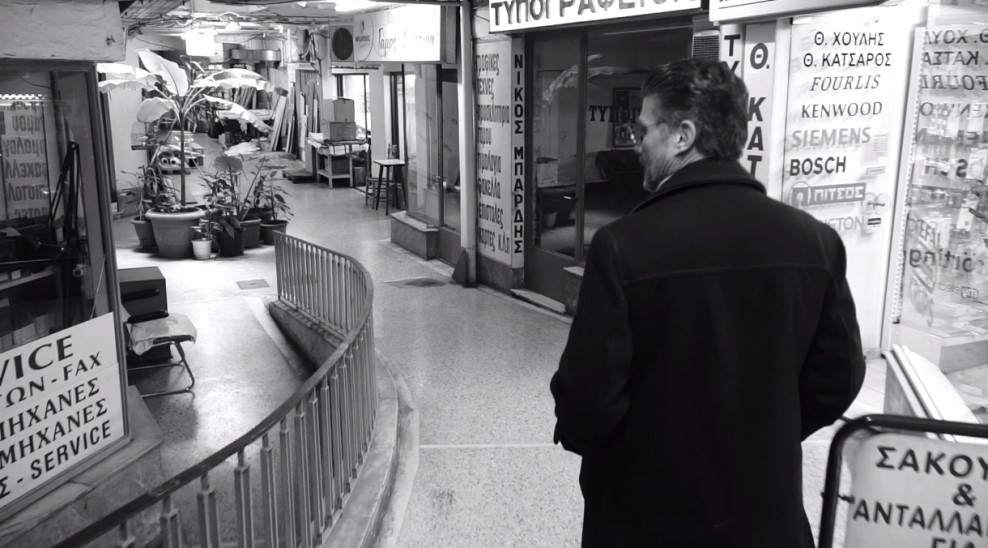 There is a humanistic approach in “Labyrinth” that brings to light the story of the city and the personal stories of the storeowners in an elegant way. Would you like to elaborate?

I knew the arcades but not the people working there. And for me, knowing them was a kind of discovery. Their personal stories are the stories of the place, but also stories of the city, and even more, stories of a country, as many of them are second or third-generation family owners. It is important that these people are making things themselves, they are craftsmen, even artists, and they are devoted to their work, which is their life. So, although they talk about their work, at the same time they create the profile and map of the city’s centre and its history for almost the last century.

Why did you choose a flaneur/ narrator in the film?

"Labyrinth" is a hybrid film. It is a mixture of documentary and personal fiction on the arcades. So, the narrator gives the fictional side of the film. I am the flaneur and I wanted to put alongside people’s stories, my personal view on them.

Architecture, your love for the urban centre and mysticism interweave in a very Athenian film. How did you work with your director of photography to combine these elements?

Athens is the invisible protagonist in most of my films. As I’ve noted, I have a strong, experiential relationship with her. Every arcade brings memories, stories, and images. I decided to shoot the film in black and white, so that I could go further than realism, touching the inner sense of people and places.

Ten years ago, I created a video installation on the city, with scenes from my films, called “Athens Underground”, which has been presented many times since then and in different sites and will continue to do so. Labyrinth’s spirit exists already there.

"Labyrinth" is an ode to the hard-working people there and the dignity of work. What attracted you to the people in the arcades?

The protagonists in my films are extraordinary women and men. The people in "Labyrinth" are extraordinary as they combine a personal morality and a pure and wholesome belief in their work, while at the same time they remain amazingly humble.

Would you like to say a few things about the reference to light in the film?

I was always impressed by the artificial light in the arcades. It gives the sense of another world, a magical place in the heart of reality. And these people have passed the biggest part of their life under this light. At the same time, there is a reference in “No Sympathy for the Devil”, my film on Orpheus and Eurydice’s story in a dystopian Athens. The film begins with the same voice-over: “Lights, endless lights…”

What were the challenges in making this film and what are your plans?

I never thought of making a documentary. But as I said, this is a hybrid film I made in an almost mechanical way, following my memories and listening to people I met for the first time. At the same time, inside the arcades, I had an unexpected meeting with cinema itself. All these gave a magical touch to the film, so I think I have gone further from my first thoughts.

“Labyrinth” was made during the preparations for my new feature, a film that is completely different and the biggest challenge I have ever undertaken. It is “Medea”, based on Euripides’s play, and after four years of preparations, I am shooting in the woods, leaving the city for the first time. But “Labyrinth” opened a new path and so I am also preparing another doc-fiction on cemeteries, called “We the Alive”.

Read also: Filmmaker Dimitris Athanitis on scratching beneath the surface of the Invisible